Mother’s Day was interesting.  Harley was celebrated as a mother (to-be) with flowers and everything.  And rightly so, even if our little gun is still not quite ready to breathe the same air as us.

You’d have to ask her how surreal that was (if at all), because I’m not certain she’s had the time to process such things.  I think for my part, I can at least recognize (intellectually) that we’re about to be parents for realsies… but the actuality of such a thing is still sort of… other.  It’s both now, and also not yet.  Like a Kingdom.

Now that the other parent-type-day-thing is approaching, I’ve been thinking about my own father.  But before I get to that, let me give you some background…

I generally get upset at lazy people.  Especially when their laziness stresses my wife out.  She’s pregnant, and works full-time, and takes care of her husband and house and three-year old niece.  She doesn’t deserve anything less than peace, so my bravado generally attempts to seek out and brutally destroy anything that serves to further the strain on her.  I have imaginary, self-righteous, judgmental conversations in my head with these lazy or manipulative or disrespectful people.

They usually don’t even have a clue that they’ve upset anyone, or even recognize they’ve done anything wrong.  And saint that my missus is, she always always seeks out where she is at fault in these relationships.  She makes true attempts to see everyone else’s perspective at all times.  She makes concession without excuse, and gives grace to people unflinchingly.  Especially the people that hurt her (inadvertently or otherwise).

But not me.  I try to tear them apart and hurt their feelings in these internal monologues against them.  I point out (in these fictional dialogues) just how ridiculous they are.  There are no answers back in such conversations – no divergent points of opinion or defense.  These sort of things are safe, without the challenge of actual communication.  These sort of things are also highly toxic.  Not to them, but to me.

Sitting in a place of judgment of another person only ever serves to highlight our own faults with razor-accuracy.  Into such conversations, I tend to introduce these lazy people to my father. See, my dad is the victim of cerebral palsy as a result of forceps used in delivery when he was born.  He’s perfectly fine as far as his facial muscles and his brain function (literally the smartest man on earth, and wise… ooh boy, the wisdom of my pops…) but he’s never been able to walk correctly.  I remember his unconventional stride growing up.  Then after some years, he had to use a cane to walk.  Then two canes.  Then a scooter and two canes and pain medication and it only gets worse the older he is.  It’s his thorn in the flesh.  I wish I could take it from him, but I can’t.

Mrs. G and I have some paperwork we have to sign in order for the doctor to be able to deliver our daughter into the world.  There’s a section of this paperwork (that is probably standard-fare liability stuff) that deals specifically with the event of needing to use the vacuum-thing or forceps to assist in getting my child out of her mother.  Now, conversations about birth don’t make me squeamish – but when you put the word ‘forceps’ and my child in the same sentence, I suddenly have the urge to damage you repeatedly.  Not because it’s a certainty, and not because I don’t like/trust our doctor…  But my dad got the same way when they tried to use them during my birth.  What parent wouldn’t, having known my dad’s story?

But my dad’s had a remarkably humble and jovial approach to his legs – never taking himself into the realm of the victim or treating his handicap like it even exists.  No one who knows him even thinks about it unless it’s brought up specifically in conversation.

He is the epitome of selflessness and strength.

He’s worked every day since I was born to ensure a good, safe, and happy life for my mom, my sister, and myself.  When I got married, there was literally no one else who could possibly stand beside me as best man.  He might have had to do so with two canes and a hefty amount of pain, but my dad was there.  He’s always been there.  And he’s always worked hard.  My dad is an amazing mechanic.  I can remember one occasion vividly, when I was in high school and was out with some friends.  I was learning to drive stick on my buddy’s Mitsubishi Sapporo, and I think in my efforts I probably threatened to drop the transmission on the pavement.  Something went ‘ding’, and we found a payphone (yes, I’m old and this was before anyone had a cellphone, but let’s not dwell on how old I am okaySHUTUP).

I used the payphone to call my dad.  He listened to the engine over the phone and told us precisely what was wrong.  Like a boss– in exacting detail.  My friend took notes of dad’s diagnosis to the shop.  The repair guys didn’t have much to do except fix it.

My dad is awesome.  He is actually comprised of awesomeness itself.  I’m pretty certain that if he ever cried – his single tear would strike the ground with such force that the earth would split, and from it’s gaping maw would arise unicorns with chainsaws for hooves leading a chariot made of bacon and platinum carrying Chuck Norris.

So when I have my self-gratifying little imaginary fights with these lazy people, I will inadvertently bring up my father.  My father – who worked in garages and emissions testing labs for almost 20 years to make ends meet for his family.  My father – who despite his legs continuously losing their ability to function, picked up a cane and went right back to work.  My father – who still, to this day, fixes people’s cars out of the goodness of his heart.  My father – who listens to me whine about my desk job, the lazy people, the minor or major aggravations of my incredibly blessed life – and genuinely wishes that he could take all pain and suffering and discomfort upon himself.  Without question, without apology, without an ounce of pride or hubris.

And then I make myself pour grace over the flaws of other people.

My dad’s story reminds me of what value is.  That even if I never am proven ‘right’ or ‘justified’ in my fight against these others… it doesn’t matter.  They may change, they may not.  They may understand how deeply they hurt those I love (or myself) and they may never reach that understanding.  Doesn’t matter.

Being “right” does not matter.

My dad was marginalized, defamed, unjustly dismissed and refused so many times in his life.  He endured the injustice of his own body, and the further injustices of stupid men, and kept walking.  He kept walking his walk, embracing his life and all the fights in it.  And for Heaven’s sake – the man can’t walk as well as you and I.  Not physically.  But as far as spirit and soul go – he walks better than all of us.

My dad destroys the tenacity of all other men on the planet.  My dad encourages and promotes the spirit of people who complain about anything, ever.  Never judging harshly.  Never comparing his own struggles with anyone else’s.  Ever.  My dad is a hero.  Plain and simple.  And if my daughter gets a dad even a fraction as good and stalwart out of me, then she’ll be more blessed and protected and loved than 99.999999% of humanity.  My dad is the standard by which lesser men (such as myself) are measured.

“Uh oh, you better not elevate your father to such messianic-sounding heights or else it’s blah blah blah…“

If I aim to be half the father mine is, then my kid(s) will get an amazing dad.  My wife will get an amazing husband.  My life will mean something to this world.  Because my father is the unsung hero of countless people who’ve known him over the years.  His influence and compassion may not be fully recognized or lauded here.  But when he gets to Heaven (WHICH IS A LONG TIME FROM NOW PLEASE)… I swear earth’s going to have to call the cops on the party God will throw in his honor.

You’re my example, my challenge, and my hero. 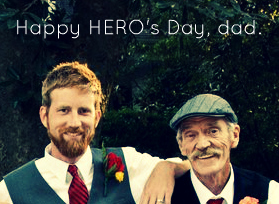