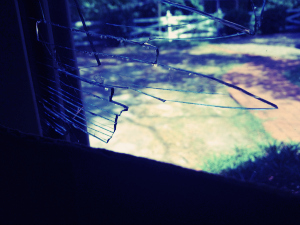 A week and a half or so ago, I arrived at my home to discover a window broken and opened, a dent in my front door, and an empty wall where my television used to be.

I had been down the street, on my way back to work from running an errand for the wife (baby-related) when I flipped my phone over to see two text alerts from my alarm system and a missed call from the alarm company’s dispatch.  I called them back.  Yup, an alarm had been triggered by one of the sensors in my house.

I wasn’t too worried at first.  I tried to imagine the cats wrestling and jostling one of the sensors loose or something similarly benign.  I told the dispatcher that I was thankful he’d already alerted the police, and that I was close by, so I would go to the house myself and wait for the cops.

Scanning the approach to our home revealed nothing out-of-the ordinary at first.  Then I saw the window open.  Then I saw the gate to the back yard ajar.  Then my emotional range shifted from fear to rage to numbness in about a millisecond.

The cops came, went through the whole house, insurance was notified, lots of calls to people asking about repair people they might recommend, some prayers of thanksgiving for only having lost a tv…  And a reluctant call to the lady of the house to explain what had happened.

I thought she might have gone into labor if I told her we’d been broken into.  She took it in stride, but like so many things that hit you from out of nowhere, we went a few days with numbness and shock only to find ourselves hurt, violated, and very angry.

I know I’m not the first victim of such crime.  I know friends and family who live with this sort of thing as a daily threat.  I know people who embrace such circumstances and choose to live in places on this earth where the threat of rape, mutilation, torture, and death are daily realities.  All we lost was a tv.  Our comfortable house was damaged a bit, and some uninvited punk walked upon the same floors my child will learn to crawl upon.

From what I’ve heard, most to-be parents look out at this broken world of ours with fear and trembling.  Drought, famine, disease, texting-and-driving, crime, despair, consumerism, faithlessness…  It all can become too much to consider when thinking about your soon-coming child’s future.  Will they be safe?  Will they be happy?  Will they live to old age?  Will they love this stupid messed-up planet I’ve doomed them to?

These fears go from the ethereal realm of hypothetical to etched-in-stone reality when your own life is hit with such circumstance.

The trick is to move beyond the reaction.

My house getting security upgrades (which it has) and shopping for a new gun (which I am) is reactionary.  I don’t think taking precautions is out of place, but if you stay in that place of panicked “This will never happen to me again, so help me God” reactionary thought then you’ll eventually become crippled in all the other areas of your life.

The first weekend after the incident, I didn’t want to leave the house.  Every creak and sigh of the house or beep of an appliance made us jump and reach for sharp cooking utensils.  The following week at work was spent thinking about what was happening at home without me there.  Spending time worrying about what might happen again leads to more time researching surveillance systems, dog adoptions, and firearms than actually doing the work you get paid for.  And that single-mindedness spills over into being emotionally absent from your family – mentally incapable of re-engaging the niece who’s three and doesn’t understand what she’s done to put you so on-edge – spiritually incapacitated when attempting to love your wife who’s still readying herself for the baby that will be arriving whether or not anyone’s comfortable with the circumstances.  And so on…

It affected me at work as well.  Missed deadlines, managers bothering me for overdue reports, a lack of energy and engagement…  All resultant in further reaction, further despair, further unsettled-ness.

I began looking for peace, for safety, for renewed completeness in my own power to provide such things.

Reaction can isolate us.  It gives motivation to change, to reinforce, to become aware – all good things – but it also can have the power to remove us from our equations.  If we let it, we can be consumed by reaction.  We can check our phones relentlessly, expecting the next crisis.  We can research in despair, finding no fool-proof system of man to completely fulfill our desire for safety and hope.  We can get so wound up in the pursuit of “never again” that we ignore our families, our blessed moments with those we love, our responsibilities…

I have broken down in anger a few times this week.  I can be that honest.  I have probably spewed forth profanities at you because you drive like a grandma or dress like a thug.  I am genuinely sorry for that – for reacting to my own humanity and embracing the worst parts of it for a moment.  It was a moment too long, a moment you didn’t deserve.  A moment I lost touch with the miracle of my pending child.  A moment I let go of my wife and pursued my own hurt.  A moment I lacked the strength to give attention to the niece who’s three and just wants all of your attention right now now now now now.  A moment I shirked my duties at work in favor of worry.  A moment I refused to ask God for strength and decided I knew how to be strong on my own without Him.

I am sorry for dwelling too long in my reactions, and not nearly long enough in forgiveness.