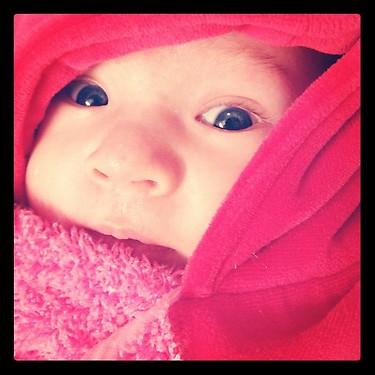 Our daughter is the most beautiful creature to ever grace this planet with her presence.

I know every parent ever has somehow believed that their child is the most amazing, handsome, gorgeous, innocent, pure, delightful, fantastic, breathtaking, precious, inspiring, earth-shattering, world–changing, poop-generating entity in existence.

Unfortunately for all other parents – you’re wrong.  Our daughter is perfect.

Your kid(s) are pretty cool, admittedly, but there’s just no comparison.  Because comparing children to each other is wrong.  And mean-spirited.  And uncouth.  And my daughter would win anyway.

I’ve struggled to put words to this.  More than a month ago, our daughter was born.  It was a long day, and it’s been a long few weeks since.  It seems like a day more recent than it actually is, and simultaneously an eternity ago – as if she’s been here all along.  My father told me that I would soon come to a place where I wouldn’t be able to remember what life was like before the little one was a part of us.

He was right.  It took about an hour.

The world has been put on notice, and rightly so – for she is destined to change it.  Our tiny pilgrim is outright amazing already. She turns her tiny noggin with ferocity and a depth of emotion I’ve never witnessed in anyone at the mere sound of her mother’s voice.  Her eyes light up like stars when I begin to sing to her – like she’s trying to take in experiences with every fiber of her little being.  Nothing is passive for her.  She is engaged with her all.

And then she gets hungry and makes noise at decibel levels something so small shouldn’t even be capable of.

She is suddenly, and without apology – your everything.

Fatherhood has left me actively in pursuit of my knees – either physically (because of exhaustion, tripping over the maddening volume of baby items, or looking for something that’s been lost in the sea of household chaos) – or spiritually (because God knows I have no earthly idea what I’m supposed to do with this fragile life I’ve been handed).

We went for our checkup at the doctor’s office that morning.  It had been pre-scheduled.  We were overdue by six days, so it was the twice-weekly meetup season.  First, we had another ultrasound.  There were three things the medical practitioners were looking for…

They give 30 minutes total for all three items to be checked off the list.  The first two were accomplished pretty quickly.  But – instigator and rebel that our daughter is – she waited until minute 28 to start pretend-breathing.  See, if they hadn’t finished their checklist, things like induction and other ’emergency’ measures would have been discussed or scheduled.  Her mom and I didn’t want that.  We were praying she would come on her own, as naturally as possible.  We had a Doula hired and everything.

The doc checked things, and there was zero dilation.  None.  Things I (as a male) have no business discussing in mixed company appeared ‘ready’ down there – but no dilation.  The mom-to-be was more than a little disappointed.  It would have been nice to see some progress.  We drove back home.  My mind was already transitioning to work mode, in preparation for my late arrival to the office post-appointment.

But then we got there, and suddenly things started getting progressively uncomfortable.  And then we were in active labor.  And then our Doula came over.  And then 8 hours of intense pain and suffering that I could do nothing to alleviate for my poor wife.  And then the car ride to the hospital.

We barely arrived at the labor & delivery front desk to check in when her water broke.  Two nurses checked how far along things were, exchanged glances, heard my wife repeatedly asking “how far am I?” and then finally told us – “9 centimeters”.  I called my folks and quickly spouted “Baby’s coming now.  Like, tonight.  Like, now now now.“, basically hanging up before the return “Wait wait… what?!” had completely escaped my mother’s lips.

I remember my state of being when her head came out, turned and there was her chubby face.  I can’t write it out here, because it was emotion… and raw… and prayer and thanksgiving and absolutely everything that I am… poured out into a single moment.  People always say there’s no feeling like it.  People are right about few things in life, but man… people were right about that one.  It’s your entire life, all that you are, all that you feel and think and believe and experience – is fully awake for a single instant.  And even that overdone, potentially cliche description is pale and lifeless words in comparison to the reality of it.

I looked at her mother, who was exhausted and more beautiful than anything I’d ever seen.  Even more than our baby girl.  My wife – without drugs, without an injection of any kind, without uttering a single ugly word to me during the entire day… had given me the single greatest gift ever.  She gave me my family.  Weeks later, I still catch mother and daughter sleeping soundly and can’t help but feel the rush of joy, pride, and abject terror at being personally responsible for that moment’s existence.  I can get mushy in moments like those.

I haven’t cried, like actually had a tear drip out my eye in forever.  I can’t actually remember the last time.  Some well-meaning friends have said there’s something wrong with me for not being visibly or outwardly emotional like… ever.

I think I just save up those reactions for the epic.  When I finally held my dear for the first time, I’m man enough to admit I was ruined forever.  In the nicest way.  There may even have been some fluid escape my seeing-face-hole-things.

Sleep is no longer a concept your reality can embrace after the birth of your child. All the horror stories your coworkers and parents and friends have told you about the sleepless nights and tympanic-membrane-destroying cries are true. And those cries will enter your dreams at four in the morning – mere moments after you’ve finally resolved the previous crisis of poo and the cleansing thereof.

And the cries cannot be reasoned with. They are made of desperation without cause or resolution. There is no reasoning with the screaming pile of flesh and doom thy loins hath conceived. You’re screwed. Forever.

Parenthood (in its earliest days) is the fight to reconcile all remaining preconceptions of what life would be like with what it is now.  Its the fight between complete rapture at the very presence of your child in the world… and the urge to punch the wall repeatedly with your face because the kid won’t just go to sleep already and oh God I have to be up in an hour for work and please Lord just give me strength not to lose my mind right now and there’s no reason for you to be shaking the walls with your crying and how are you even doing that with such small lungs and you’ve got a clean diaper and were just fed eight minutes ago and please don’t finally fall asleep ten minutes before the alarm goes off like last night please child…

I imagine all you other parents will read such a ramble and nod to yourself, knowingly.  I imagine you reminisce with a smile at the tiny cuteness of your own () child and a slight shudder like someone still overcoming their PTSD.

But the crying is only serving to accentuate everything else.  There’s lots of feeding.  There’s lots of sleeping.  There are brief moments of alertness when her eyes are wide and actively trying to consume the entirety of her new planet’s visions.  There are new things like cooing, and smiles, and squeaks.  Adorable.  There’s also (more importantly) so much hair that a mohawk is inevitable.  There’s such lung capacity that singing and shouting loud while she plays and runs and embraces the good of the world is equally inevitable.

There’s hope in kids.  I think they’re built of it.

There’s a chance to endure the upending of your little world for the joy of a much bigger one, now that she’s in it.  There is so much good that the brief discomforts are as nothing to you after awhile.

And it all eventually becomes second nature.  The screaming that rocked my personal calm to its foundations becomes merely the sound of her exercising those vocal chords in preparation for her music career (or as an auctioneer, professional yodeler, or bullhorn…)  The poo becomes a health indicator.  The long nights become an excuse to walk around and talk about my day with a captive audience on the shoulder.  The constant care becomes a mission – something that matters more than whatever entertainment or personal improvement activity that time was previously occupied with.

Because she’s mine.  I am hers.

Because I loved her before she even existed in this air-breathing form.  She loved me the same (she told me… that, or she was farting and I misunderstood… whatever).

Because every choice, action, activity, purpose, direction, motive, and thought is permanently grafted to her existence.  Everything large and small suddenly matters more than it ever has.

Being a parent forces a truer perspective upon you.  It forces change for the better, at the cost of your self.  And it rewards in greater measure than anything you might sacrifice for it.

Welcome to the planet, little Sojourner.